As the summer festival season comes to a close, Outside Lands happened unlike any ordinary festival under the sun. San Francisco’s summers are as crazy as its winters as any local will tell you.

While some festival goers tend to love their fair share of flower crowns and high-waisted shorts, Outside Landers found themselves bundled in their winter beanies and knitted sweaters as they’d frolic about in the magical fog invested forest of Golden Gate Park. In other words, this festival was less about the festival fashion and more about the music. PHEW! (But, don’t get me wrong San Francisco has some of the best street style out there.)

However, there are certain things to expect judging from previous years, as this was the 7th annual Outside Lands Music Festival. Vendors from all over San Fran supply delicious treats and alcoholic beverages to keep tummies satisfied.

There usually will be a dad rock n roll band or two headlining, but also a few electronic power house DJs to keep those rave kids satisfied, and of course people will find new and improved smuggling tactics to get through security with their illicit substances. As everyone fell through the rabbit hole during the opening day, there were many surprises that were soon to become a reality on the other side.

Outside Lands Day One:

The first day was set off with a bang when the electro-funk duo Chromeo gave the crowd something to groove about at the Lands End Stage (main stage). I’m not the biggest fan of Chromeo, but I found myself shaking it. They gave off an 80’s funk style with their talk-box synths and slicked back hair.

But quite honestly, I could not keep the other booming dynamic duo Disclosure out of the back of my head. They have blown up this past year and were on my must see list ever since their album Settle came out in 2013…in my world, every song on Settle is a hit.

Disclosure opened their set with “F For You” and immediately everyone was in a deep house/disco trance. One of the members, Howard, was getting funky on some live percussion while his brother Guy was on the turntables. They played hits such as “Situation”, “Confess To Me”, and “When a Fire Starts To Burn”. The sun set behind their stage and the fog started to roll in setting the scene for a mystical dance floor when they played “Help Me Loose My Mind”.

Day one was coming to a quick close because of the strict 10 pm sound curfews that were in full force every night. Kanye West and Arctic Monkeys were the headliners that wrapped up the first day of stimulating chaos.

Arctic Monkeys played at the Twin Peaks stage which was about a 20 minute walk from the main stage so after seeing a tad of Kanye West we started our journey to catch some swaggering indie rock and danceable neo-punk.

Outfitted in his trademark grease lighting hair and leather jacket, Alex Turner led the Monkeys in some oldies, “I Bet You Look Good on the Dance Floor” and “Old Yellow Bricks” which were definitely the recipe for a mosh pit party and boy was it.

They also played a ton of new hits from their newest Album AM which were a little more pop and a little less garage rock. Arctic Monkeys undoubtedly drew a smaller, but far more appreciative crowd than Kanye. True Arctic Monkeys fans got a ton of dancing room that night!

The sea of people was even more overwhelming the second day and maybe that was because the lineup was even more stellar than the first. The indie rockers Local Natives were our first to see at the Lands End stage. They create their own sound with tight, intense percussion, clean guitar melodies, and vocal harmonies that can easily woo any crowd. This being the 3rd time I’ve seen the Local Natives, I knew they would put on a magical show and it lived up to my expectations. 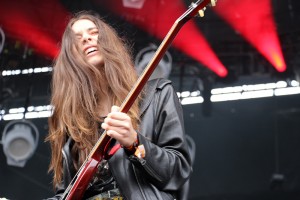 Then there was Haim. Let me tell you these girls are extremely bad ass! The crowd seemed to agree with me too. Although their songs are very catchy and pop-based, the lead singer/guitarist Danielle Haim would gift the crowd with rock n roll riff relief when she would shred her cherry red Gibson SG. Danielle could be the equivalent of a female Jimi Hendrix and she definitely left me awe struck. 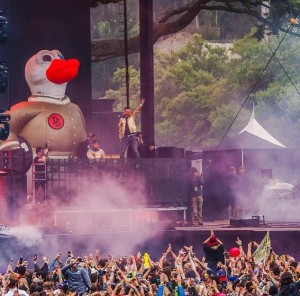 At this point in the day, if you had disco fever, you were at the Duck Sauce set at the Twin Peaks stage. Duck Sauce is a two-man saucy combo, A-Trak and Armand Van Helden. They are responsible for party anthems such as “Barbara Streisand” and “NRG” in which they threw into their set.

Duck Sauce is bringing disco back in the sexiest EDM way. The goofy duo engages the crowd by cooling them down with squirt guns and throwing out duck bills for people to wear. They hit the ground running with “aNYway” as the inflatable two-story duck behind the boys almost started to get its boogie on too. Duck Sauce definitely set the tone for the rest of the festival.

Tom Petty & the Heartbreakers closed day two at Lands End. Although, I’ve only listened to a hit or two by the group I still had such a euphoric feeling when I saw them live. I felt as if I time travelled back to the smoky Palo Alto bars in 1979 where these songs were played first. But the mass amount of people felt like a sold out stadium.

Tom Petty & the Heartbreakers proved that they still got that rock n roll soul and they stole my heart that night. They closed their set with “American Girl” which sent everyone on a twirling rampage. 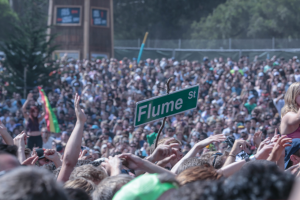 We woke up on day three with one thing on our mind…Flume! Flume was first for us and we could not be more stoked. As we walked through the entrance we noticed how everyone in the venue was swarming to the Twin Peaks stage, where coincidentally Flume was melting faces with his house and U.K. garage beats.

We were literally packed like sardines for his set and it felt like the whole Outside Lands population was there. Flume started with “Insane” and that was the moment the crowd reached “raising the roof” party mode with no concern of looking insane…just continued dancing.

He threw down the bangers such as “Holdin On”, “You & Me (Flume Remix)”, “Lorde-Tennis Court (Flume Remix)”, and “Tell Me – RL Grime x What So Not”. The climax of his set consisted of What So Not’s track “Touched” and there literally was not a still soul for that song. Talk about twerk city. Flume’s set was freaking ratchet…hands down best set of the weekend.

As the festival started wrapping up, Spoon put on a considerably good performance getting the main stage warmed up for the big names to come: The Flaming Lips and The Killers. 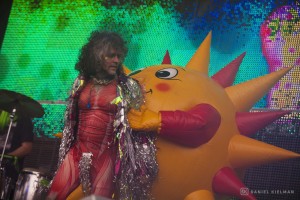 The Flaming Lips were flaming with psychedelic style. As I looked at the lead singer Wayne Coyne with his costume filled with metallic silver glitter stencils, which matched his hair…I got to a point where I wish we were related. He looked like a fairy up on stage with his face brushed with colorful paint. Surrounding him were people in inflatable costumes from mushrooms to rainbows. Coyne crowd surfed in his human hamster ball while giving the audience an over the top serenade. 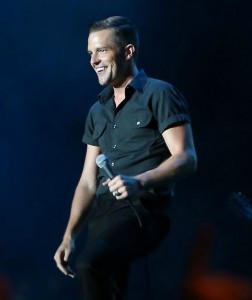 Coming to the close of the third day I was filled with nostalgia because I was about to see The Killers whom I’ve been a dear fan of since their first album Hot Fuss was released. As I waited there filled with anticipation, I watched Brandon Flowers and the rest of the band come onto the stage and as the camera zoomed onto Brandon Flowers face and you could see his pupils dilate with awe and excitement because of the overwhelming aura of the crowd.

Flowers gasped, paused and the melody of “Mr. Brightside” started to ring throughout the venue and everyone went wild. They played hit after hit such as “When You Were Young”, “Jenny Was a Friend of Mine”, “Spaceman”, “Human”, “Read My Mind” and “Smile Like You Mean It”. They were a perfect closing for such a diverse music festival. They too were one of the biggest highlights of the weekend.

Outside Lands Music Festival undoubtedly had it all…music, food, wine, beer, art. Those are five of my favorite things if I do say so myself. What more can you want? Talk about recapturing the flower power in San Francisco. 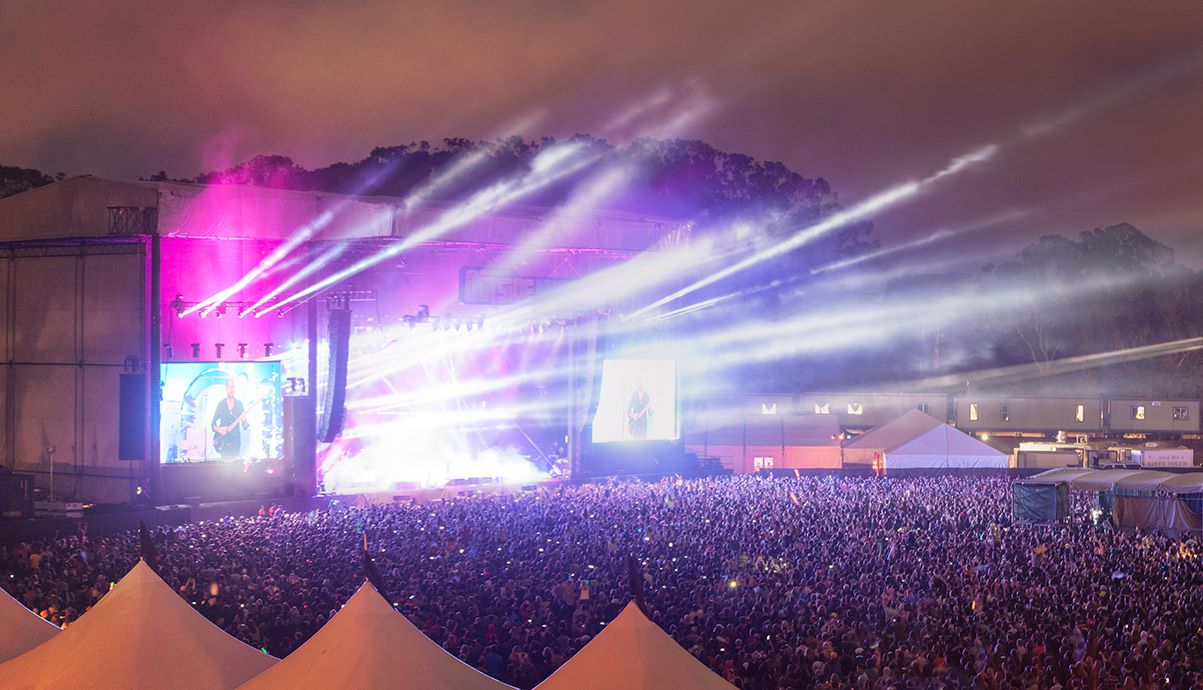 Thanks, Outside Lands! See you next year!