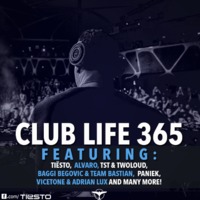 For the past few weeks I have been covering Tiesto’s Club Life Podcast’s and I assure you that they just keep getting better and better. This weeks Club Life features new music ranging from Alvaro, Eric Prydz, Jus Jack and Dimitri Vegas & Like Mike, so this is yet another Club Life that you do not want to miss out on.

Tiesto starts off Club Life 365 with Alvaro’s new song “Shades.” Alvaro has toured with Tiesto over the last year and I even had the amazing opportunity to watch him opened for Tiesto at Electro Beach back in March 2013 in Mexico. Next, Tiesto transitions into one of my recently favorite songs, “Drop It Like This” by TST vs. twoloud. Something about the beat in this song pulls me in.

Next up is the Baggi Begovic & Team Bastian’s “I Know U,” which was just released on April 4 on Tiësto’s Musical Freedom. Known for his hit song “Sleep Till I Come Home,” Baggi Begovic collaborated with Team Bastian in order to produce this big room style uplifting banger, the heavy bass and swift vocals forming in perfect unison. Tiesto drops a Roul and Doors Remix of Christina Perri’s “Human” next, followed by Paniek’s “Spark It Up.”

Hands down, one of my favorite EDM songs of all time is Adrian Lux’s “Teenage Crime.” I will never forget the first time I heard it live during Avicii at Governors Island when he was first touring. Since I was a teenager at the time, the song instantly sent me into a world where nothing could stop the moment. This smashup of “Teenage Crime” featuring Vicetone turns the original version on its head, giving it a complete new feeling.

Up next are Stadiumx & Taylr Renee’s “Howl At The Moon,” Eric Prydz’s “Liberate” and Tim Mason’s newly released “Starlight.”

Jus Jack’s vocal mix of “Stars” is up next, another great song. This was actually my first time hearing the vocal version, and I was super excited for it considering I had been listening to the version without the vocals for a while now. I was waiting for this moment and it is no disappointment! The beat to this song is tremendously moving, and the lyrics contribute to its wonderfulness. I could not wait until listening to the end of it to download this version.

Tiesto closes this week’s Club Life with D-Rashid’s “Famous” which has a hell of a drop, his own remix of Jack Eye Jones’ “Playground,” and Dimitri Vegas & Like Mike vs Martin Garrix “Tremor.”

This Club Life is no upset, featuring new releases and fun, upbeat songs. You still have yet to let me down Tiesto, and I don’t see that happening anytime in the near future!