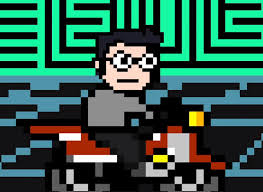 Alvin Risk is starting the new year off with a brand new music video for “Zoom,” off his 2013 Junk Food album, inspired from one of the internet’s favorite memes, Nyan Cat.

“Zoom” sounds like it comes straight from an Atari game soundtrack. The track is a whirlwind of 8-bit techno complete with a classic Alvin Risk twist, making it a dark, cinematic song that sounds like it came straight out of an Atari.

The music video to accompany the release of “Zoom” perfectly embodies the track’s essence, as it depicts a digital Alvin Risk protecting the earth from evil space cats with the help of his Nyan Cat friends (one of them with an odd resemblance to OWSLA founder Skrillex).

Alvin Risk is set to embark on his New Moon Tour starting in Miami next week which will include guests like Brillz and Skrillex. See below for more dates.