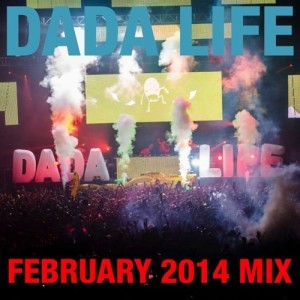 If “Flashlight” doesn’t make you want to get up and dance yet, Tujamo’s new song “Hey Mister” will have you on your feet. Tujamo’s funky drop takes me back to when I first heard his song “Who” at The Venetian’s Tao Beach in Las Vegas back in 2012 during Nicky Romero’s set.

DVBBS & Tony Junior’s “Immortal We Live Forever” follows next, Dada Life introducing the song with a joke that “they think they’re mortal and they want us to live forever.”

The rest of their February mix contains brand new releases Tom Staar “Rocket,” Joey Dale’s “Shockwave,” a new song that was released on Hardwell’s label Revealed, among others.

If you have not listened to this mix yet, you are missing out. Dada Life’s full of life set takes you back to a festival state of mind. Who else besides me is ready to see them in action this year?!