If you’ve heard anything about the Skrillex-founded record label OWSLA, then you probably know that they’ve got some of the biggest names in the business under their name. 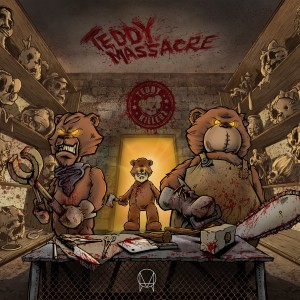 EDM heroes such as Dillon Francis, Kill the Noise, Destructo, and Porter Robinson make OWSLA seem like a fancy dinner party to which only the best of the best get invited.  In short, an OWSLA sticker on an album is like a shining seal of excellence, and that’s why we get so stoked every time they announce a new name on their label.

Although they’ve been on OWSLA’s list for a bit, (Since their Make It Bun Dem remix impressed Skrillex so much that he put them on the label) the Teddy Killerz have been flying under the radar, only producing singles, remixes, and a few short EPs.   The Russian/Ukrainian duo has been all over the scene; they’ve dabbled in everything from trap, to Drum and Bass, to Dubstep, to something they’ve labeled as “teddystep”.  For a time, it was difficult to see just where the murderous and lovable plush bears were headed, but OWSLA knew.  OWSLA knew the whole time.

Teddy Killerz’ latest album, Teddy Massacre, is their second release under Skrill’s monster label, and it seems that the boys really rose to the occasion for this one.  While Teddy Massacre may be as diversified as their previous work, it all seems to come together in a neatly wrapped, funky, and horrifying package.  The first song on the release, Cult, feels like an easy-listening house track mixed with a barrage of heavy-handed beats and drops.  Pandora gives off a trance-influenced, soothing dubstep vibe, before slapping you with a sexy saxophone breakdown (seriously, skip to about 2:00 if you don’t believe me) and falling back into some thick and dirty grooves.

The album as a whole is undeniably impressive, and although the diversity here is obvious, the Teddy Killerz seem to have finally defined themselves stylistically.  OWSLA made a good call with these guys, and after Teddy Massacre, it won’t be long before the Killerz are rubbing elbows with the big dogs.