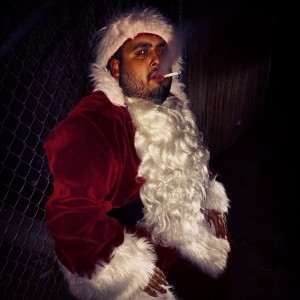 Good day, loyal readers. What a pleasure it is to meet you! My name is Richie Martin and I’m the new hip hop correspondent for JustNoiseToMe. I could spend a couple paragraphs telling you about myself, and how my beard is recognized as a sovereign nation by the UN. But instead, I’ll introduce myself in the best way I could possibly think of — with a list of my favorite hip hop albums of all time.

This list is in no way meant to be definitive or even a list of what I think are the best hip hop albums. It’s in no particular order. This is simply a list of the dozen-or-so albums I could listen to forever. However, if something on this list touches a nerve, I more than welcome your anger and bitter commentary. But I’d rather be your friend, so just keep that in mind before you start harassing me, punk.

There had to be at least one Wu-Tang album on this list. Why Liquid Swords? It’s an honest toss up for me between 36 Chambers, Tical and Only Built 4 Cuban Linx. I picked Liquid Swords because it’s the album that got me into Wu-Tang. I remember listening to them early in my teenage years and just not getting it. Fast forward a couple years to when I started making beats just for shits ‘n gigs and something about GZA’s sound really struck a chord. But really, you could pick any of the initial albums from any member of the Clan of the Killa Beez and I wouldn’t put up a fight.

I might get a little bit of hate for this one. I really wanted to pick Southernplayalisticadillacmuzik, but I was four years old when that shit came out. As much as I LOVE everything Outkast has made, my introduction to Three Stacks and Sir Lucious Leftfoot was during the peak of their popularity in the early 2000’s. This album is insanely diverse in its sound and really showcases Dre and Big Boi’s unique (and sometimes crazy) approach to the genre.

Little Brother is a trio consisting of the formidable rhyming duo, Phonte and Big Pooh, with the legendary 9th Wonder handling the production. I’m not sure if there was a bigger influence for me growing up than 9th Wonder. His production is on point from beginning to end on The Minstrel Show. Te and Poo are on a mission to show you how slighted they really are by the lack of recognition they receive, with numerous lines targeted to fans and the media for their consistent recognition of played out bullshit. Regardless of the message (which was received with plenty of criticism), this album is a joy to listen to from beginning to end.

I had never dabbled much in the offerings of the Tribe until I made a trip to Rock the Bells, and got to see them perform Midnight Marauders live. It was a surreal experience. Q-Tip’s energy infected the crowd of I don’t know how many thousands of people in a way I’ve never ever fathomed to be possible. Busta Rhymes made a surprise appearance and changed my fucking life. Maybe that’s a little hyperbolic, but immediately following that weekend, I downloaded the entire Quest discography and made my peace with the hip hop gods for denying the word of ATCQ for so long.

This is another choice that might catch me some flack. For one, yes, I know. This isn’t an album, it’s a mixtape. For two, it’s Wiz Khalifa. But again, this isn’t a definitive list of the “best” of anything. As you can tell, most of the selections so far have a story to go along with them, and Kush & OJ is no different. Its release marked what was probably the height of Wiz’s popularity and he absolutely destroyed Twitter for a solid week. This is the soundtrack to what is probably the most memorable summer of my life. If I could go back in time and listen to any album/mixtape for the first time all over again, this might be it.

I might as well get the other mixtape out of the way. Action Bronson is absolutely my favorite artist right now. He’s got fantastic taste in beats and frequently takes a chance on something you’ve definitely never heard before. He’s a laid back dude with a braggadocio as big as his appetite. Produced by fellow Brooklyn Native, Party Supplies, Blue Chips 2 is a hilarious, graphic and bold project that’s gets more and more fun with every listen. I’d like to apologize in advance for how much I’ll be writing about Action Bronson.

Not exactly sure what you want me to say here. I love Kendrick, I love TDE and I can’t wait to see what these guys do in 2014. If only Kendrick was as enjoyable live as he is recorded. But I digress ….

The first 16 bars of “Life’s a Bitch” were life affirming the first time I ever heard them. Once I learned them, they also had me convinced that I could be a rapper, too. Well, we now know I’m not a rapper. But on a lazy Saturday afternoon cruising down the highway with your windows rolled down, AZ and Nas can still manage convince me that I’m the baddest dude around, if not just for a few moments. For me, Illmatic is THE Nas album, no argument. It’s 10 tracks that perfectly sum up the glory of 90’s hip hop.

I’ve lived in Arizona for more than half of my life now, but Texas is and always will be home. When I really started to get into hip hop, nothing was cooler to me than the thought of rappers from MY state getting the recognition I knew they deserved. The title of Slim Thug’s first major release was a daring boast that never came to fruition, but he still managed to create a decent amount of buzz outside the Lone Star State with his syrupy slow delivery and thick Texas twang. Slim has never recaptured this sort of mainstream success, but Already Platinum is still one of my favorite listens.

Jeezy’s 2005 release brought trap music to the masses (or at least to the forefront of my mind). The song “Go Crazy” went crazy, thanks in part to a verse from Jay Z, and all of a sudden, suburban high school kids like me were disciples of ATL hip hop. Look, I can’t identify with anything Jeezy has to say, but if it sounds good, I’ll listen to it. I’ve got so many memories of driving around to this album in my best friend’s Explorer, outfitted with a couple of comically oversized subwoofers and feeling like a bad ass. As cringe-worthy as those memories might be, they’re still fun to think about. Plus, this was just a great debut album.

http://www.youtube.com/watch?v=7H25vfOM3SU
The only repeat contributor on this list is 9th Wonder, so if you’re not a fan, you may not be pleased. But this list isn’t about you, IS IT? Murs and 9th Wonder did a lot together, but this 2006 release has to be my favorite. The production and rhymes are on point throughout this entire album and reaches its climax with the wonderfully sampled title track. Bob James’ “Nautilus” has been sampled time and time again, but again, this is easily my favorite rendition. The song “Barbershop” is a great concept track that’s perfect for one of those days where you just got a raise, got the car cleaned, got a new pair of kicks on and of course, a fresh new haircut.

Hate any of my selections? Do we have any albums in common? Let me know! I’m excited to be here and can’t wait to hear from you. Cheers!